SEOUL, SOUTH KOREA – The “Hermit Kingdom” of North Korea has a long history of building larger-than-life impressions out of it’s leaders. This, by itself is not unusual. Many nations commonly portray their leaders as strong, powerful men. The US released a picture of former president George Bush hauling a log. Russia released a picture of Putin (shirtless for no apparent reason) riding a horse.

Not to be left behind, North Korea has begun it’s own efforts to portray it’s young leader, Kim Jung Un as another powerful leader. How to do this when said leader is a rotund boy-child obsessed with eating? You do it the old-fashioned way, with Photoshop!

The Hermit kingdom is not unfamiliar with Adobe’s popular software. As recently as March, The Guardian caught them red-handed editing a photo showing more hovercraft, during a military exercise, than in the original photo. And like most countries that rely heavily on Photoshop for military credibility, they seem immune to being outed.

That’s why North Korea is at it again. This time, displaying their dear leader to North Koreans as a powerful leader of men. We’ve uncovered the truth, and can show you the original photos and the edited ones.

Below, we see young Un during the manly art of handling his pistol. Impressive, yes? This is what strong men do.

In the “un-edited photo” below, he was doing what young boys do. He was choking his chicken. 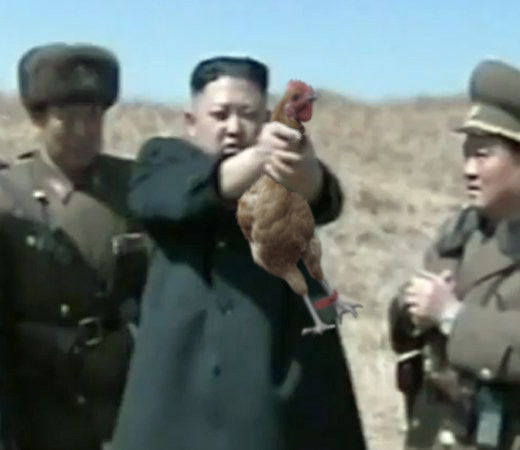 Below, we see Kim giving orders to his military. A “Leader” directly involved, the mastermind behind the successes. A MAN leading from the front. Photoshop can create powerful impressions.

In the “un-edited version” below, Kim was blithely unaware of anything else besides his sausage on a stick. Someone needs to tell him he’s supposed to hold the stick.

While only dimly aware of technological advances that most of the world enjoy, we can at least be thankful that some North Koreans have obviously learned to use computers and advanced computer programs. Perhaps some day in the future, it will make it easier to bring the wayward nation back into the civilized world.

I like looking at the serious subjects in the news and seeking the lighter side of the issue. I love satire and spoofs. I see the ridiculous side of things all the time, and my goal is to share that light-hearted view.
View all posts by EagleAye →
This entry was posted in Asia, Geo-Politics, Military, Photos, World and tagged Choking Chicken, eating, Funny, George Bush, Hermit Kingdom, Humor, Jest, Joke, Kim Jung Un, Lampoon, North Korea, Photo Editing, Photos, Photoshop, president vladimir putin, Putin, Satire, Sausage on a stick, World Leader. Bookmark the permalink.