Written for Trifecta: Week Eighty-Eight. Story begins after the image. 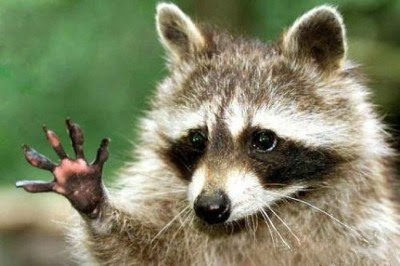 It was normal that a former tech geek turned sorcerer would band together with a product of wild magic like Jake. What bothered Phil  was that nobody knew his hard drinking and talking, cigar smoking companion…was a raccoon. Phil’s sorcery allowed him to see Jake’s true shape, yet be perturbed by how no one noticed.

“Ain’t you the cutest thang!” Said the voluptuous bartender, Milly, to Jake. She caressed his paw. “I never see a real man like you around here anymore, since the demon came.”

“It’s takes a vixen like you to know,” said Jake with his characteristic Boston accent.

As Molly poured another Johnny Walker for Jake, Phil said, “What about that demon?”

“Yup,” said Milly. “Drove all the customers away, ‘cept Jake here.” She beamed.

“When does it appear?”

A burst of light and heat heralded the arrival of the demon. It’s horns were aflame and scorpion tails lashed from it’s shoulders. “Prepare to die, Mortal!” It bellowed.

From behind the bar Jake said, “Pouring a drink before I die. What else?”

“Throw me my satchel, Jake.”

Jake grabbed the satchel while Milly guarded him with an upraised bottle. “Not the Laphroaig Scotch,” admonished Jake, handing her a bottled water. He threw the satchel to Phil.

Phil removed a blowgun from the satchel and loaded a dart.

“No weapon of man can harm me,” roared the demon. Vainly it lashed at Phil’s magic circle, unable to break it.

“This one isn’t,” noted Phil. He fired and the dart struck the demon’s chest. The demon screamed as it exploded into a cloud of soot.

“Oh Jake,” squealed Milly, mashing Jake’s face to her breast. “You killed it!”

This week’s Trifecta writing challenge in to use the third definition of Band (3: to gather together : unite) in a story between 33 and 333 words long. Original writing prompt may be found here: http://www.trifectawritingchallenge.com/2013/07/trifecta-week-eighty-eight.html

I like looking at the serious subjects in the news and seeking the lighter side of the issue. I love satire and spoofs. I see the ridiculous side of things all the time, and my goal is to share that light-hearted view.
View all posts by EagleAye →
This entry was posted in Interesting People, Short Fiction and tagged Bartender, Demon, Flash Fiction, Funny, Humor, laphroaig scotch, Magic Circle, Raccoon, Short Fiction, Short Story, Sorcery, Trifecta Writing Challenge, Wild Magic. Bookmark the permalink.