Written for Sunday Photo Fiction. A story, about a lost AI experiencing for the first time through television, begins after the photo. 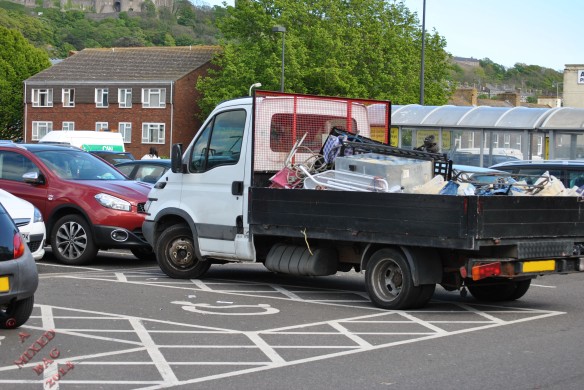 As the crippled alien research vessel, [unpronounceable], began to burn up in Earth’s atmosphere, the ship’s AI ejected itself in an attempt to save its life. Contrary to popular belief, Artificial Intelligences are not just computers. They possess a full compliment of emotions including about 27 more than humans (or when compared to politicians, about 63 more). Survival instinct being one of these.

It landed, more or less intact, in a junk heap outside Bexley, South London, while the ship went on to make news over Chelyabinsk. After months of being ignored, an artist found it and thought it would make a lovely part of modern art. He placed it in his lorry, and before he could make it home, he stopped at Doxie’s for tea and scones.

The AI’s box looked rather simple, yet it hid a series of eight long legs for just such a situation. The AI named, [unpronounceable] (we’ll call it, Tim), eased itself out of the lorry feeling quite nervous (emotion #56) and crossed the street—narrowly missed by a Volvo—and entered the nearby block of flats. Seeking shelter, it easily computer-hacked into one. It looked about and saw electronic devices everywhere. It quickly surmised the purpose of the TV remote and hacked it. After facing atmospheric reentry and crossing heavily-trafficked streets, Tim faced its most dangerous challenge yet: television.

Three hours later, it had watched several episodes of Housewives of Detroit, Survivor: New Jersey, and a rerun of 90120. By then, Tim had prepared itself to self-destruct. Humans apparently possessed no redeeming characteristics to speak of. Tim could only envision a horrific future with humanity.

At that moment, Henrietta Jones returned home. She turned in time to see the shuddering, eight legged box run and hide behind the easy chair. Frightened at first, she noticed the quivering sensor peeking furtively through her ficus plant. A social worker by trade, Henrietta quickly recognized abject terror (emotion #114), even if in an alien octoped. She kneeled and, being rather intelligent, surmised it might find her car remote entertaining. She placed it between her and Tim and sat back. Henrietta’s supposition was quite right and, after moving forward tentatively, Tim hacked into it and shortly set off car alarms for 17 different vehicles.

Though fascinated by the strange creature, Henrietta was quite tired after being screamed at all day. She decided to put Tim at ease by being at ease herself. She turned on the telly to find an episode of Housewives of Bronx NY. She choked on her own bile and looked at Tim who began quivering again. “Is this what you’ve been watching?” she asked.

Henrietta watched it sympathetically (emotion #83—not found in the US Senate) and said, “You poor dear! Let’s try this again, shall we?”

Soon, Tim snuggled beside her as they watched the movies Splash, ET, and Short Circuit. After awhile, Time decided self-destruction wasn’t so necessary and, feeling comfortable at last (emotion #19), turned off the countdown for his 5 Gigaton fusion bomb.
________________________
A scene from Short Circuit:

I like looking at the serious subjects in the news and seeking the lighter side of the issue. I love satire and spoofs. I see the ridiculous side of things all the time, and my goal is to share that light-hearted view.
View all posts by EagleAye →
This entry was posted in Short Fiction and tagged Alien, Artificial Intelligence, Emotions, Flash Fiction, Funny, Fusion bomb, Humor, Science Fiction, Short Circuit, Short Fiction, Short Story, Social Worker, Space Ship. Bookmark the permalink.