Written for Sunday Photo Fiction. A story, about a younger generation trying to reconcile older methods, begins after the photo. 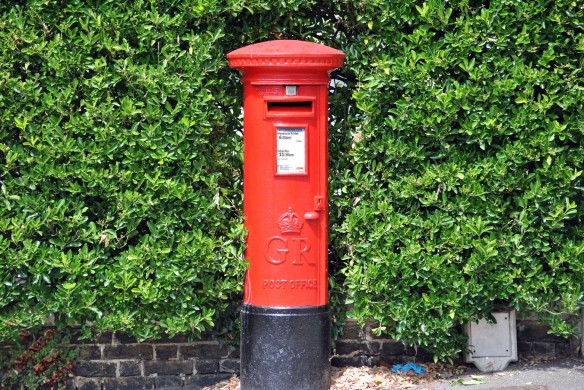 While waiting for the tram, Linda finally decided to ask the question. “Hey Jules, what is that?”

Linda pointed across the street. “That thing over there, looks like a phallic symbol.”

Linda’s face screwed with confusion. “What do you need it for? You just hit ‘send’ and the mail’s off.”

“Right. You write a message and you press ‘send’ on your phone,” grimaced Linda.

Juliette rolled her eyes. “I mean mail written with pen and ink. You glue a stamp on and stuff it all in the postbox. That’s the theory anyway.”

“Oh! I saw my mum doin’ that when I was little. I thought she was makin’ modern art. Is it really true?” said Linda, incredulous.

“Pretty sure. It’s all bloody stupid if you ask me.”

Juliette paused to send a Twitter message. “Dunno. Maybe for tourists. I saw some Americans taking pics of one.”

Just then, Fariz the Fanatic, strode into the crowded tram stop across the street. He pulled open his olive jacket to reveal a suicide vest loaded with C4 explosive. Triumphantly, he held up the trigger and shouted, “Allahu Akbar!”

Juliette blinked away afterimages. A searing particle beam had lashed out from the re-purposed postbox, and removed the head and trigger hand of the suicide bomber. “Oh, that was smashing!” she said.

“Brilliant!” enthused Linda. “So that’s what they’re for, Jules. I knew your whole ‘postbox theory’ was rubbish!”
_____________________________________
Each week, Alastair Forbes, photographer extraordinaire, posts one of his original photos as a flash fiction prompt. Lucky writers like myself then write fiction or poetry based upon the photo. Look here for more stories about the photo at the start of the post: http://sundayphotofictioner.wordpress.com/2014/06/22/sunday-photo-fiction-june-22nd-2014/

I like looking at the serious subjects in the news and seeking the lighter side of the issue. I love satire and spoofs. I see the ridiculous side of things all the time, and my goal is to share that light-hearted view.
View all posts by EagleAye →
This entry was posted in Short Fiction and tagged Flash Fiction, Funny, Humor, Postbox, Short Fiction, Short Story, Speculative Fiction, Suicide Bomber, Tram. Bookmark the permalink.