I apologize for the lateness of this followup. I’m not staying in a four-star hotel, I’m staying with the people, where WiFi is spotty. The family techie, Eric, has juggled cellphones, simcards, services, and called in favors to arrange an internet connection for me. Internet is available here, but the average folk don’t acquire it as easily as we do in the US, and then it’s not as fast.

Our trip through Siquijor continued with interesting people, animals, and beautiful sights.

No one ever tapped my shoulder (see part 1 if that makes no sense). However, my in-laws, in classic Filipino tradition, were constantly trying to feed me. I think I’m gaining weight. I’ve tried more kinds of fish than I know the names of, and rice and I are now constant companions.

I’m burning through camera batteries like crazy. I have to keep the camera on always because I never know when I’ll see something amazing as we drive along.

This woman was kind enough to let me take her picture, but I think she became impatient while I adjusted camera settings. Perhaps these bananas are heavy.

At the century-old Balletes tree there’s a pool. Stick your feet in and the fish will happily eat away the callouses and dead skin. Shey says it tickles a little, but otherwise feels pretty good. 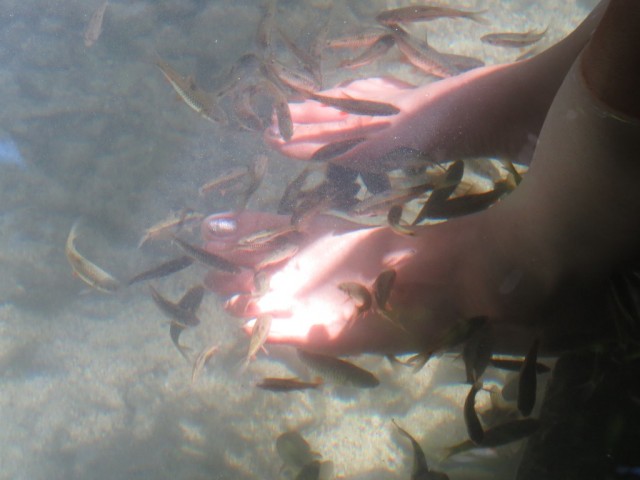 Ringed Kingfisher. They are as common as crows in the Phils. I’ve seen more kingfishers in two weeks here than in a lifetime in the US. 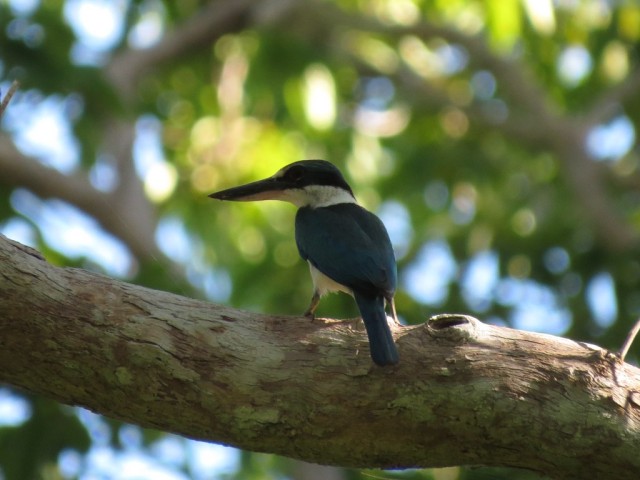 One of Siquijor’s beautiful beaches where we had lunch with She’s mom and two aunts.

Auntie Nita enjoying grilled fish, kinilaw (Filipino ceviche), and the omnipresent rice with some fascinated onlookers. Many of the dogs you see are strays waiting for scraps. They are often laying near or in the road. They’re quite adept at dodging cars.

Auntie Nita loves to tell stories. She can remember that pirates could be found in the island until the 1950s. When she was a girl going to school in Dumaguete, she had to take a small sailboat across to the isle of Negros. Only rich people could afford power boats. When she got there, no dock existed, so a man would wade out to the boat. She’d climb on his shoulders and he would carry her to shore.

I like looking at the serious subjects in the news and seeking the lighter side of the issue. I love satire and spoofs. I see the ridiculous side of things all the time, and my goal is to share that light-hearted view.
View all posts by EagleAye →
This entry was posted in Interesting People, Nature, Photos and tagged kingfisher, Philippines, Photography, Photos, Pirates, Siquijor, Travel. Bookmark the permalink.