Written for Sunday Photo Fiction. A story, about a misbehaving train engine, begins after the photo. 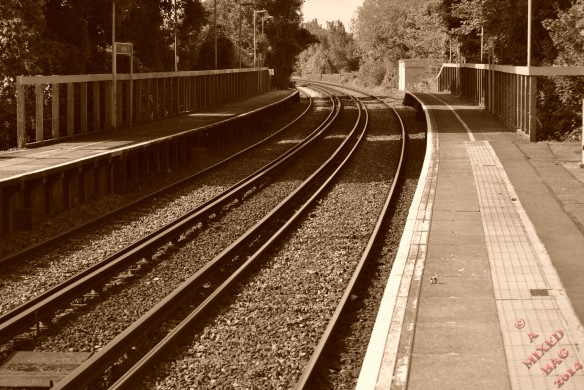 The Engine That Wouldn’t

I had a long drive through Oklahoma. I hadn’t slept well in the motel, and the drive back was slowly killing me. As I approached the tiny town of Pettigut (Pop. 347), my eyelids began to droop, but I still caught a sign that read:

I needed a break, so I pulled off the highway and found the rail museum easily.

The engines weren’t in great condition. I imagine the museum’s maintenance budget barely existed. Luckily, they weren’t rusting away, and with child-like glee I photographed every one of those wonderful classics. After about an hour, I stopped into the museum office. A sign on the door read:

Closed second Sunday of the month.
Open all t’other ones.

Inside the ramshackle building, a large-scale model train trundled and ‘wooed’ along the wall. Model train sets and prints of old steam engines were for sale on dusty shelves. The clerk behind the desk had unruly white hair poking out from under a railroad man’s cap. His white beard brushed against an issue of Model Railroader that he read intently. He waved casually without looking up. “Afternoon.”

“Afternoon,” I said, and amused myself with examining the many pictures of trains on the wall. I came across one with nothing in it but tracks. I pointed to the old sepia picture and said, “What’s this?”

Without looking up the clerk said, “That’s ol’ No. 66. The engine that wouldn’t.”

The clerk leaned back with his hands behind his head and said, “Ol’ No. 66 wouldn’t go out gracefully like t’other engines. We’d call the scrapper to come git ‘im, and when they come, 66 was gone. We found ‘im, put ‘im back and called the scrapper. Scrapper come, no No. 66 there. It happened again and again. Finally, J.T. Pettigut took a picture and promised No. 66 it’d ride the rails forever in the picture. After that, the scrapper finally got hold of ‘im and took ‘im away. And that’s the picture he took.”

I grinned. “Cool story, but there’s no train in this picture.”

The old man could move fast, I realized, when he suddenly stood beside me. “Goll dangit!” he cursed. “I tol’ ‘im, it’s only the second Sunday!” He snatched up an old lantern and charged out the door. His shouts and curses faded like the whistle of a train, then came back louder, as he passed the window going the other direction.

I figured someone put up the wrong picture, and preferred to remain in the museum office while sorted it out. Outside, I could still hear the clerk shouting.

“You know you cain’t be out here. Git back in there!”

The clerk returned and calmly replaced the lantern. “Sorry ’bout that.”

“No problem. Did you find the right picture?”

“Sure there is. See fer yourself.”

I returned to the picture. It was no longer empty, and No. 66 stood proudly on the tracks, as if it had always been there.
____________________________
Every Sunday, Alistair Forbes sacrifices one of his own pictures for use as a writing prompt. Look here for many more stories written about the picture above:

I like looking at the serious subjects in the news and seeking the lighter side of the issue. I love satire and spoofs. I see the ridiculous side of things all the time, and my goal is to share that light-hearted view.
View all posts by EagleAye →
This entry was posted in Short Fiction and tagged Flash Fiction, Funny, Humor, model train, Museum, Railroad, Scrapper, Short Fiction, Short Story, Speculative Fiction, Steam Engine. Bookmark the permalink.

17 Responses to The Engine That Wouldn’t – Sunday Photo Fiction