Written for Sunday Photo Fiction. A story, about an exotic creature seeing the bright side of things, begins after the photo. 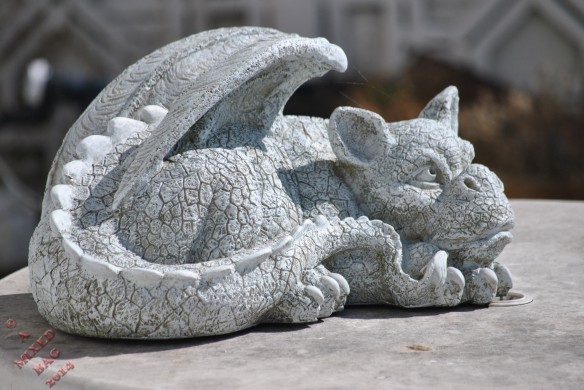 Pug hated a lot of things.

He hated being referred to as a Gargoyle. Gargoyles turned back into stone during the day. They considered pigeons a delicacy. Pug thought pigeons (and the occasional Cardinal) were the equivalent of tripe, edible but hardly desirable. Pug was a Stone Dragon. He could be animated at any time, and he longed for something better to eat.

Probably the thing Pug hated most was being stuck in the Lawn & Garden center. He had to sit still for hours in the same pose day after day, to avoid people realizing he wasn’t really a sculpture. It was important to do this. Humans loved dragons until they discovered they were real, and then they’d start killing all over again.

Eventually, Pug’s fortunes turned for the better. A gardener, working for the city of Washington D.C., thought he’d make a great decoration for a nook in a garden near the Capital Building. His new location was well-covered by trees and bushes, out of sight from casual observers. It was for this reason that Pug learned to hate politicians.

A lot of “backroom deals” were made right beside Pug. He learned very well how politics worked in Washington, and it made him ill. The so-called “civil servants,” employed at the behest of the American people, considered themselves the elite, the defacto rulers of the people they allegedly served. One Senator even referred to his constituents as the “unwashed masses,” shortly before he rutted like an animal with a hooker. Pug gnashed his teeth in silence as the Senator spread the woman across Pug’s back. Oh the indignity! Pug really hated politicians after that.

It may seem that Pug hated everything, but that would be unfair. Things changed when Pug encountered Lobbyists. Without lobbyists to empower them, career politicians would quickly lose interest in serving the people. Actually doing work would cease to be profitable if it didn’t include perks that no common working man ever saw. It seemed to Pug that a politician was like a dog that bites the hand that feeds it, while a lobbyist was the one teaching the dog to bite.

You might logically conclude then, that Pug hated lobbyists. D.C. is positively swarming with those deal-making men, so you might also imagine Pug hated his new home beside the Capital Building. That’s not true, though. Pug was no longer forced to eat pigeons, you see, and it turned out Lobbyists had a lot to offer after all.

They aren’t so bad, Pug observed, as he stuffed a Lobbyist’s mustard-coated hand into his jaws.

I like looking at the serious subjects in the news and seeking the lighter side of the issue. I love satire and spoofs. I see the ridiculous side of things all the time, and my goal is to share that light-hearted view.
View all posts by EagleAye →
This entry was posted in Short Fiction and tagged Backroom Deal, Dragon, Flash Fiction, Funny, Gargoyle, Humor, Lobbyist, Politician, Short Fiction, Short Story, Urban Fantasy, Washington D.C.. Bookmark the permalink.