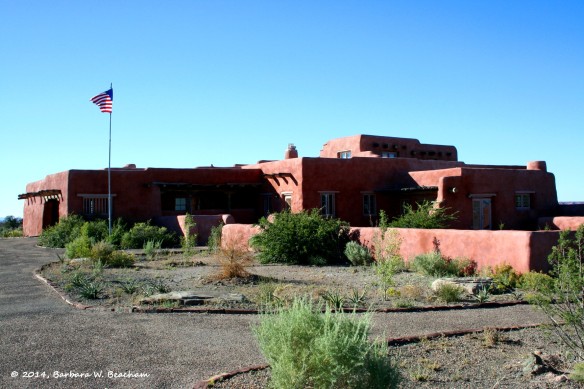 The house of Don Francisco sat in a remote part of the desert. Kirkum, a 16-year veteran, grimaced at the sprawling, beautiful mansion. “They say seven teams went in and never came out alive.”

“So why did they go in in the first place?” said newbie FBI Agent, Holcomb.

Kirkum looked at him like he was stupid, “Because no Agent ever returned!”

Kirkum said, “You stay here. We’re going in.” He and twenty other agents charged the house and crashed in, disappearing from sight. Hours later, Holcomb still couldn’t reach them on radio.

At a tiny house on the next hill, Juanita Francisco frowned. “Another bunch just went in.”

“You’ll have to remove it, you know,” she said.

“You’re right,” sighed Don Francisco. “I thought it would be pretty.”

“I know, but the FBI doesn’t understand that hologram covers up the unattractive, yet bottomless sinkhole!”
________________________________________
Each week on Monday it’s time to finish the story. This week, the opening sentence is, “The house of Don Francisco sat in a remote part of the desert.” The media prompt is the photo above taken by the talented Barbara Beacham. Look here for more stories based upon the prompts: http://mondaysfinishthestory.wordpress.com/2014/12/29/mondays-finish-the-story-december-29th-2014/

I like looking at the serious subjects in the news and seeking the lighter side of the issue. I love satire and spoofs. I see the ridiculous side of things all the time, and my goal is to share that light-hearted view.
View all posts by EagleAye →
This entry was posted in Short Fiction and tagged FBI, Flash Fiction, Funny, Humor, Satire, Short Fiction, Short Story, Sinkhole, Speculative Fiction. Bookmark the permalink.