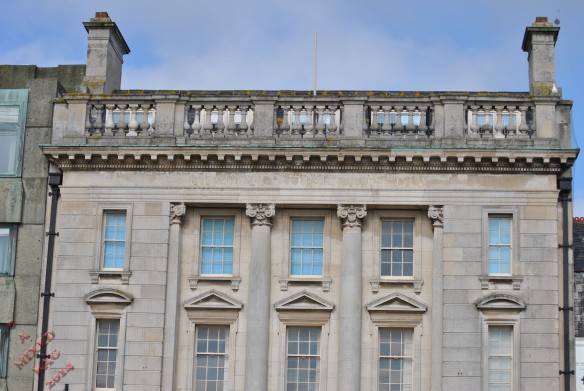 In a universe strikingly similar to our own, but different…

“Of course we’ll win, mummy,” said sixteen-year old Princess Elizabeth. “You always win.” The ribbons in her hair bobbed as she spoke. She sat for tea with her mother, Queen Ruth III, Prime Minister Healy, First Sea Lord Wooten, and Defense Minister Gallery. The small group relaxed atop the fortress-like edifice of the Admiralty Building. From their vantage they could easily witness the massive gathering of ships out to sea. The largest gathering since two years prior in 1862.

“It’s not always so simple,” corrected Healy. The unusually tall and slender man sat regally in his chair. “There is always risk in war.”

Elizabeth looked to her mother. Queen Ruth nodded, saying, “Overconfidence is improper, especially for a Queen, my dear.”

“Look at Lord Nelson’s devastating loss at Trafalgar,” noted Wooten. He took a puff from his cigar, followed by a bite scone.

“Whatever happened to Nelson?” asked Gallery.

“Destitute,” muttered Wooten. “Gets pissed every night on Water street.”

Elizabeth smirked. “Yet here we are at the edge of the sea. The Spanish and French fleets nearly within gun range, and we’re calmly drinking tea.”

Ruth raised an eyebrow. The girl had been paying attention after all. “It’s about composure, my dear. A Queen must always exude calm.”

Wooten put down his spyglass after scanning the enemy fleets. “Not a single square-rigger in the lot,” he muttered. “They invested heavily in steam-powered warships.”

“Surely we have our own fleet of steam warships,” said Elizabeth.

“Not a one,” growled Wooten. “Not in the budget. Ever since the loss at Trafalgar, England’s colonies failed. Her fortunes followed soon after.”

Elizabeth could feel herself breathing harder. “So where is the Royal Navy?”

“Off the coast of Ireland,” said Wooten with a wave of his cigar. “No sense placing them in harm’s way.”

Elizabeth felt her guts turn to water. “Where did we invest in our military?”

“Not much in steam technology, I’m afraid,” said Gallery. “The enemy’s built an army of steam-driven tanks. Those ambulating behemoths could level London in days if the enemy fleet lands on our shores.”

Elizabeth looked at the gathering with increasing rage. How could they be so calm? “So how many steam-driven tanks do we have for defense?”

Gallery sipped his tea. “Not a single one,” he said off-handedly.

“Mother!” roared Elizabeth, spinning towards the Queen. “We’re defenseless! Why aren’t we evacuating the government?”

“Compose yourself at once, child!” barked Ruth. “I’ll have no hysterics in my presence.”

“Heaven’s, no!” said Ruth. She waited until the sonic boom passed before sipping her tea.

Elizabeth felt all hope drain from her body.

Each week, Alastair Forbes presents an original photo as a writing prompt for flash fiction. The image for this week is the photo at top, and this is my story in answer to the challenge. Look here for more stories based upon the prompt: https://sundayphotofictioner.wordpress.com/2015/01/18/sunday-photo-fiction-january-18th-2015/

I like looking at the serious subjects in the news and seeking the lighter side of the issue. I love satire and spoofs. I see the ridiculous side of things all the time, and my goal is to share that light-hearted view.
View all posts by EagleAye →
This entry was posted in Short Fiction and tagged Alternative History, Eurofighter Typhoon, Flash Fiction, Funny, Humor, Lord Nelson, Nelson, Science Fiction, Short Fiction, Short Story, Steampunk, Trafalgar. Bookmark the permalink.