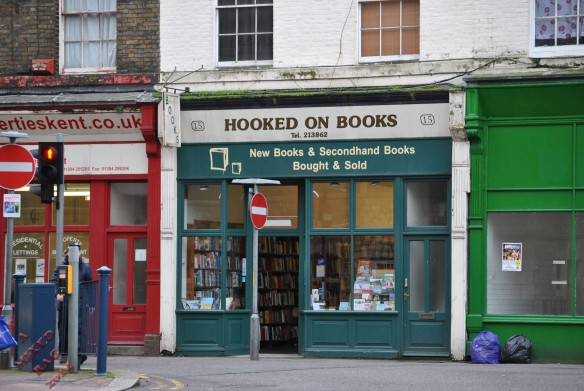 Anders Dunhill understood books better than most people. He knew that as books spent time in the loving hands of owners, they gained energy. Thus, the more a book was read and the more it changed hands, the more powerful it became. Anders believed in ensuring books always found a new home. His used bookstore became an orphanage for books waiting for a new owner. Resting on Bellamy street, the books inside protected it from riots, fire, and floods for nearly forty years. Ultimately, they couldn’t protect Dunhill from senility and that most pernicious of evils, a lawyer.

Dunhill died a week after a cleverly written lease forced him and his books out of his beloved shop.

The storms that raged during the forcible removal of Dunhill’s tomes were the worst in anyone’s memory.

Soon, a posh shop offering expensive, overly priced purses took over the space. It lasted a week until a January snowstorm clogged the streets, and, most curiously, the interior of the purse shop! To make things worse, a huge Malamute dog got in and peed on all the purses. Further, it also peed on clientele trying to get in. Their stock and reputation ruined, the shop closed down.

The expensive perfume shop that took over struggled as well. The continual moaning from within the freshly-laid brick wall forced the shop’s doom.

The ladies lingerie shop encountered the most extraordinary thing. A periscope smashed up from floorboards, sending everyone into a panic. Police never found the cause, but noted the scratched lettering on the device that read, incompletely, “Na…il…s.”

After three failures, the space was considered cursed.

Lillian Tanager didn’t worry about curses. She occupied the old building after it collected dust for three years. Lilly’s Bookstore and Cafe carried the smell of old books and fresh coffee into the street beyond. Soon beatnicks and university professors called it home. It became a breakfast nook serving poached eggs and kippers all day. Clientele flowed in and out continuously. Books found owners.

And then the most remarkable thing happened.

Somewhere, in those invisible spaces between printed lines, resting comfortably in the fibers of yellowing pages amongst old and powerful friends, an old man smiled.
_______________________________
Author’s Note:
Can anyone guess the books that sabotaged the stores? Should be an easy one to answer.

Each Sunday, photographer Alastair Forbes voyages to a used book store on Bellamy Street in Brighton, and sacrifices his own photos for use as writing prompts for flash fiction. Okay, it doesn’t exactly work that way, but you get the idea. The photo at the beginning of this story is Alastair’s prompt, and the following story is my answer. Look here for more stories answering the prompt: https://sundayphotofictioner.wordpress.com/2015/01/25/sunday-photo-fiction-january-25th-2015/

I like looking at the serious subjects in the news and seeking the lighter side of the issue. I love satire and spoofs. I see the ridiculous side of things all the time, and my goal is to share that light-hearted view.
View all posts by EagleAye →
This entry was posted in Short Fiction and tagged Flash Fiction, Sabotage, Short Fiction, Short Story, Urban Fantasy, Used Books. Bookmark the permalink.