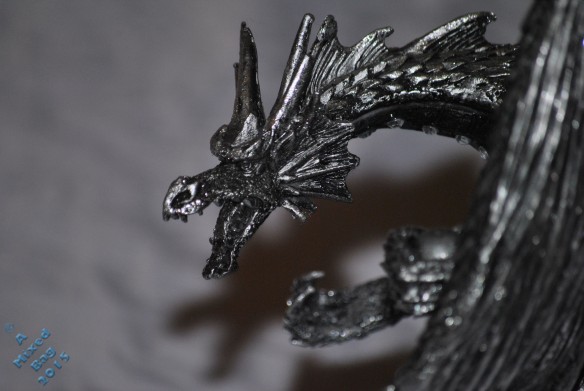 The rules for dragons were different in this time of weak magic. Normally a dragon’s soul flowed into an awaiting egg. Without anyone believing in the things between things anymore, dragon souls found themselves pulled into simple figurines instead.

The experience infuriated Palimfurus. Unable to move in the silvery dragon figurine of Smaug, he focused his powerful mind on the young girl every time she drew near. He willed her to know his name, and know he was no evil dragon. He couldn’t tell if she felt his call or not.

Elle returned home from school. At 14, she was dreaming of love and romance with someone wonderful like Aragorn from the Lord of the Rings movies. She stopped at her desk to make her Aragorn and Arwen figurines kiss warmly. “Kissing is important!” she told the figures.

Then she turned to the figurine of Smaug. “I sense some good in you, you know.” Elle paused. She’d been thinking about this a lot. “You need a secret name to pull the good out. I will name you…”

You can do it! Palimfurus focused hard.

YES! Now give me a task, thought Palimfurus. Release me!

“It’s up to you to guard Aragorn and Arwen, and everyone in this house, okay? That’s your secret mission!”

Palimfurus sighed. Seriously? He needed a great task to release him from the boundaries of the figurine. This task was nothing. He knew freedom to assume his natural form would never occur without a great accomplishment. What could possibly threaten anyone in this gated community in suburbia?

Elle moved to her window and looked outside. Idly, she noticed a strange car parked outside, but thought nothing of it. She closed the curtains and changed out of her school clothes.

In the car outside, Dikalu put down his binoculars. She was perfect, noted the Chechen mercenary. She was blond and blue-eyed. He wondered if her fair skin would hold up in the scorching sun of Yemen. Then he scoffed. She wouldn’t see daylight for years once the Sheik’s son started having his way.

Dikalu grinned. She would fetch a higher-than-normal price, he was sure of it. Kidnapping her would be easy with the parents leaving on a “date night” and leaving the teenager behind. Too bad that trusting her alone in the house wasn’t their greatest worry!

Red and blue lights flickered across the face Sergeant Poul. He said, “You wanna talk to the parents, or see the body?”

Detective Jefferies yawned and took another sip of fresh coffee. “Body,” he mumbled. It was going to be a long night.

Poul shrugged and led him to the body. He pointed. “Not much left to identify. We’re trying to get prints from the car over there.”

The head and shoulders of Dikalu were incinerated. His skull had crumbled as the very bone began to burn. The fire had been highly focused since the rest of the body was, largely, intact. Still, the legs were crushed, the bones fractured in numerous places as though an enormous weight stood upon them. It was clear he’d been pinned by it, still quite alive, before a blow torch from Hell turned him to charcoal.

Across the pulped legs, a three-toed footprint, four-feet across, shown clearly. Jefferies nodded to it and said, “That looks like…”

“I wouldn’t dare to comment on it,” said Poul, looking away. “The tracks continue to the street and disappear.”

Later, Elle didn’t risk admitting all she’d seen. “I remember he had golden eyes,” she said. “What does it matter? He rescued me!”

“Well, did he say anything?” said Jefferies.

Elle just smiled sadly. “He said he was free at last!.”
_______________________________
Alistair Forbes is back after a long and well deserved rest. Welcome home, Al! Each week, Al sacrifices a first-born photo to the Gods of Literature so that we may write flash fiction stories from his wonderful pics. This is my story answering the pic above. Look here for more stories based upon the same photo: https://sundayphotofictioner.wordpress.com/2015/04/19/sunday-photo-fiction-april-19th-2015/

I like looking at the serious subjects in the news and seeking the lighter side of the issue. I love satire and spoofs. I see the ridiculous side of things all the time, and my goal is to share that light-hearted view.
View all posts by EagleAye →
This entry was posted in Short Fiction and tagged Dragon, Flash Fiction, Kidnapper, Magic, Short Fiction, Short Story, Urban Fantasy, White Slaver. Bookmark the permalink.