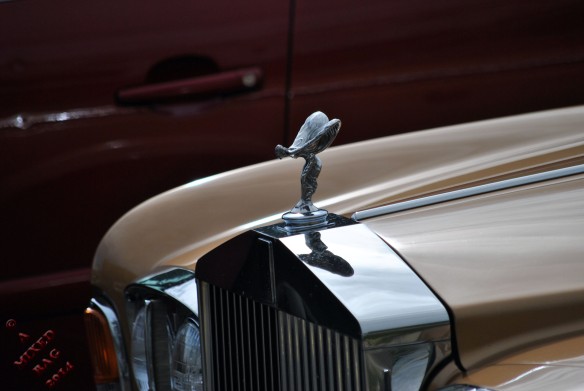 Marcus didn’t believe in old lore as much as his wife. Even so, he didn’t mind making the occasional run to the alternative medicine shop. It was interesting with all its curious oddments. While he browsed, his 9-year old, Kevin, chatted with the shopkeeper.

“They were fighting,” Kevin said with glee. “The new hood ornament pushed the original until it fell off! Then it took the old one’s place.”

Marcus returned to the counter and snatched Kevin up. “Sorry about that,” said Marcus. “He has a vivid imagination.”

“Not at all!” said the shopkeeper. “Young Kevin is describing a Pinya’lefell.”

“Never heard of it.”

“Obviously, they only emerged with the advent of cars, so there’s nothing about them in the old lore. They’re real enough though.”

“They’re energized by the flow of the wind at high speed,” enthused the shopkeeper. He placed some honeysuckle atop their packets of yew bark and sage. “If your Pinya’lefell ever looks tired just rub some of that on it, and it will feel better.”

By now, Marcus had had enough, and he paid up.

About halfway home as they neared the narrow Huntbury’s Bridge, a car coming the other direction took up most of the lane. Marcus was forced to swerve. The other car passed as Marcus struggled to return to the narrow road. Tires squealed as the unmaneuverable Rolls skidded onto Huntbury’s Bridge, out of control. The rear end crashed through the guard rail and stunned them both. When Marcus recovered his senses, the car teetered on the bridge, half on, half off. The creek, 60-feet below, gaped as if anticipating their deadly fall.

Marcus gunned the engine, but got nowhere since the drive wheels hung in the air. Kevin began screaming and Marcus tried to shush him. But when Kevin pointed vehemently, Marcus realized why the boy shouted.

The little hood ornament had come to life! It strained, leaning forward as its wings frantically beat the air. Marcus couldn’t imagine such a tiny creature affecting anything, but incredibly, its efforts paid off. The huge car shifted forward fractionally. It wasn’t much, but it got the wheels back on the surface of the bridge. Marcus gunned the engine again and the car leaped forward, back to safety on the bridge.

Marcus ran to the front and found the Hood Faerie collapsed on its side. It was panting and looked near death. Marcus ran back and collected the honeysuckle. Gently, he rubbed the flower all over the tiny creature. After a few moments its breathing settled and it gave Marcus a tired smile. It would recover.

As they drove home, the wind invigorated the tiny Pinya’lefell. Soon it stood up again and spread its wings.

Kevin smirked, “Still think I have a vivid imagination?”

I like looking at the serious subjects in the news and seeking the lighter side of the issue. I love satire and spoofs. I see the ridiculous side of things all the time, and my goal is to share that light-hearted view.
View all posts by EagleAye →
This entry was posted in Short Fiction and tagged Faerie, Flash Fiction, Hood Ornament, Myths, Rolls-Royce, Short Fiction, Short Story, Urban Fantasy. Bookmark the permalink.