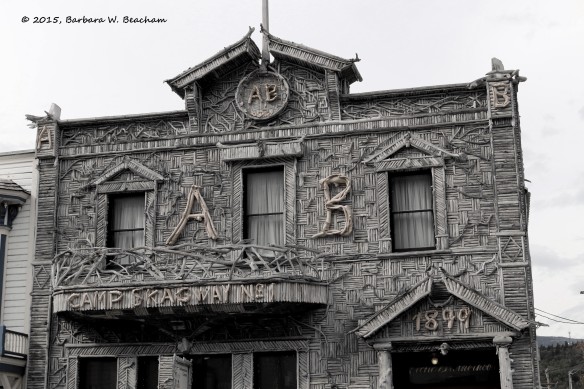 The A&B Building was made entirely from driftwood. Harry and Denise were excited to stay there while visiting Jamaica. Siboney, the owner, was gracious and an amazing cook. As they left the following morning to explore, Siboney showed them a piece of driftwood embedded in the outer wall. He said, “Whatever you go’n do, don’ take dat stick, okay?”

That chatted a while longer then left. While on a noisy bus, Harry opened his pack and removed a stick.

Denise glared, “You took it?”

“What if it’s like a keystone and the whole building falls down?” scolded Denise.

Three hours later they walked up the beach after their scuba lessons. There, beside the treeline sat the A&B building, miles from it’s original location. Siboney stood on the porch, arms crossed. “You gone an’ took deh stick.”

“Did not!” squeaked Harry.

“But you’re the owner!” said Denise.

“House thinks you’s deh owner, so you is.”

Harry and Denise marched inside and collected their things. They decided to cut their trip short. Neither ever expected to encounter a stalker, and they never dreamed it would be a building! They took the first flight home, knowing the house could never follow such a distance over water.

Two days after returning to upstate New York, the A&B Building appeared in their back yard. Siboney stood shivering on the porch. “You live like dis? No wonder you go Jamaica!”

They leaped into their car and raced to a hotel. Within a month they stood outside their new house in Virginia. As they toured the grounds smiling and relieved, they found the A&B Building in the back yard. Siboney sat on the porch drinking a Mai Tai. “Hey! Dis much better. Thank you!”

They moved to Seattle, Butte, then Tempe. The building followed them everywhere. Finally, they accepted fate and settled in Florida. Siboney was relieved. Over the years he became a close friend and godfather to their children. Sixty years later, they died in their sleep.

They arrived in Heaven on a beautiful tropical island. St. Peter said, “You’re some of the kindest, gentlest people ever. So we made this place just for you. Now, we have expert builders who will make any house you like. What will you have? Castle? Mansion?”

“Naw, that’s alright,” said Harry. He pointed to the A&B Building sitting on the beach. “We brought our own house.”

I like looking at the serious subjects in the news and seeking the lighter side of the issue. I love satire and spoofs. I see the ridiculous side of things all the time, and my goal is to share that light-hearted view.
View all posts by EagleAye →
This entry was posted in Short Fiction and tagged Flash Fiction, Funny, Heaven, Humor, Jamaica, Mobile Home, Short Fiction, Short Story, St. Peter, Urban Fantasy. Bookmark the permalink.