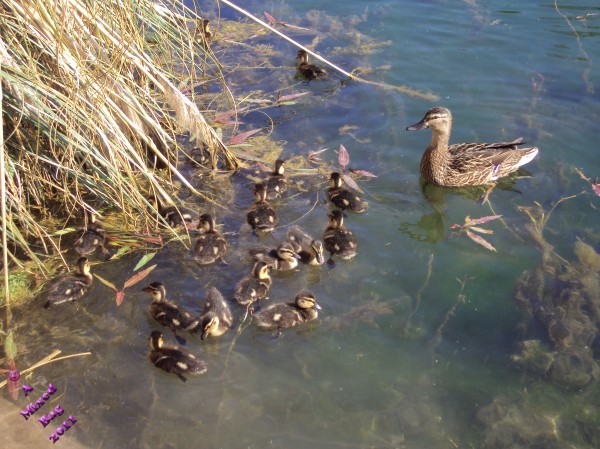 Doctor Ethan Ford sat on a park bench beside the stream. He watched a mother duck leading her ducklings into the water and new experiences. Periodically, Ethan muttered an observation about them into his small recorder.

His neighbor, Desmond Knowles found him there and joined him with a grin. “Hey Doc. Good to see you doing something real.”

Being two generations older than Desmond, Ethan wasn’t always sure what the younger man was getting at. “Eh?”

“You know. No robots or mechanically things.” He pointed to the ducks. “Today it’s natural, real things.”

Ethan lifted his cane with a liver-spotted hand and pointed, “Duckling number seven over there has an implanted Artificial Sentience. I’m observing its development.”

Desmond looked horrified. “That poor duck! Why isn’t his head all blocky and stuff?”

“The AS doesn’t need a lot of room. Nanites built a structure to house the AS. The duck’s brain is still there, operating normally while the AS ‘borrows’ it. The duck’s personality is just asleep until we’ve finished the research. The duck is completely unharmed.”

“But why mess with a cute little duck? Just write your computer program and be done with it.”

Ethan cleared his throat and entered teaching mode. “You program computers, but I believe an Artificial Sentience must be grown or better yet, evolved. When people think of ASes or AIs the first thing they think of is Skynet judging humanity a failure and killing everyone with robotic Terminators. While an unlikely scenario, the possibility exists. I believe an AS that just pops into existence cannot understand humanity. We evolved in an environment of competition. Kill or be killed. Only the strongest survive.

This natural development largely dictates how we behave. Our sentience tells us be honest, use fair play, and be kind. The same people who espouse such ideals will later digress into the aggressive behavior of animals evolved from competition. We try to ruin business competitors and overcome social competition with lies. We’re anything but fair and kind n practice. How could an emerging Artificial Sentience witness such a duality and not see a failed species?”

“This AS is going through a rapid evolution. It’s programmed to adapt to each new environment and learn about living from different animals. It’s been a Caterpillar, a Lizard, and a Duck so far. It will slowly evolve through the animals, learning about them, until it arrives at Humans.”

“Oh it won’t harm anyone. We already have Human volunteers. They’ll be well-paid.”

“I understand,” soothed Ethan. “How’s that girl of yours?”

“Speaking of that. I gotta make dinner reservations.”

Desmond left and Ethan spoke into his recorder once more. “Subject 13EX-472 is developing as expected. It is adapting to the ways and mores of its new society with enthusiasm. Development is almost complete. I expect that we can remove the AS from volunteer Desmond Knowles in a few weeks.”
___________________________________
Written for Sunday Photo Fiction. Look here for the original prompt and, under the blue link, many more stories: https://sundayphotofictioner.wordpress.com/2016/01/31/sunday-photo-fiction-january-31st-2016/

I like looking at the serious subjects in the news and seeking the lighter side of the issue. I love satire and spoofs. I see the ridiculous side of things all the time, and my goal is to share that light-hearted view.
View all posts by EagleAye →
This entry was posted in Short Fiction and tagged Artificial Sentience, Evolution, Flash Fiction, Robotics, Science Fiction, Short Fiction, Short Story, Speculative Fiction. Bookmark the permalink.

19 Responses to The Research