Zhukov sprinted through the crowds of Red Square. In the shadow of St. Basil’s Cathedral, he nearly caught the American spy. Just as he reached out, he tripped over an Englishman’s umbrella.

“Damn foreign spies!” spat Zhukov, sprawling on the ground. The American disappeared into the throng.

A Zil pulled up beside him. “Get in!” barked General Sergeiovich.

Zhukov climbed into the car. “I failed you, sir.”

“Will I be shot in the woods?”

Zhukov looked haggard. “Could I be shot instead?”

“Nyet! The loss to Mother Russia is incalculable.”

“What did the American steal? Military satellite access codes?”

“The plans for a Mach 3-capable stealth bomber?”

“Everyone has that. It’s something far more valuable.” 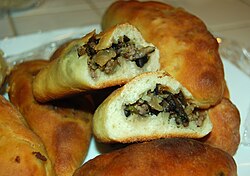 I like looking at the serious subjects in the news and seeking the lighter side of the issue. I love satire and spoofs. I see the ridiculous side of things all the time, and my goal is to share that light-hearted view.
View all posts by EagleAye →
This entry was posted in Short Fiction and tagged Espionage, Flash Fiction, Funny, Humor, Lenin, Pirozhki, Red Square, Short Fiction, Short Story, Speculative Fiction. Bookmark the permalink.

29 Responses to The Incalculable Loss