Guang-Li had long owned the “Mandarin” restaurant. For decades, Peking Duck hung from the ceiling beside the massive Foo Dogs (Guardian Lions) just inside the entrance. But times were changing. Health inspectors regularly fined Guang-Li for the Peking Duck. They claimed it was unsafe food. Guang-Li thought they were mad.

Guang-Li’s son Michael (Huang-Fu) was influenced by American ideals, much to Guang-Li’s chagrin. Michael stood inside the entrance saying, “Father! You have to remove them.”

Guang-Li was sick of complaints about the Peking Duck. “Never! It’s our culture.”

“Someone might die!” Michael knew their history. They’d killed before.

“Ridiculous!” moaned Guang-Li. His own son knew nothing.

Blount poked his pen into Guang-Li’s chest. “Remove them, now!”

The ancient Guardians perceived a threat, and the stone Foo Dogs moved suddenly. In seconds, Blount disappeared down their stony maws.

In Los Angeles in the 1980s, health inspectors tried to stop Chinese restaurants from hanging Peking Duck in room temperature. They claimed it was a health risk. Eventually, legislation introduced an “exemption.”
http://www.sgvtribune.com/health/20150822/peking-duck-is-so-important-to-chinese-culture-it-got-a-health-code-exception-heres-why 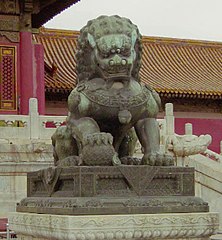 I like looking at the serious subjects in the news and seeking the lighter side of the issue. I love satire and spoofs. I see the ridiculous side of things all the time, and my goal is to share that light-hearted view.
View all posts by EagleAye →
This entry was posted in Short Fiction and tagged Chinese Food, Flash Fiction, Foo Dogs, Funny, Humor, Peking Duck, Short Fiction, Short Story, Urban Fantasy. Bookmark the permalink.