Justin was sixteen when his dad, Greg, first took him out on patrol. They walked past burned out relics from the war.

“I named my most critical gear after old girlfriends,” said Greg. “My signals scanner could detect RolyPolie transmissions and translate them. I named it after Whitney ’cause she eavesdropped on people’s conversations.”

“Makes sense,” said Justin, looking around carefully. The alien invaders had been largely defeated, but some still wandered the countryside. Thus the need to patrol. Folks called them “RolyPolies” because the Pillbug-like aliens rolled into a ball when wounded.

“I named my plasma rifle after Jodie. She was hot tempered.”

The truck suddenly rose up on tall metal legs. It stomped with one of its four enormous feet and squished a charging RolyPolie.

Greg beamed with pride. “Best bug stomping machine ever made!” 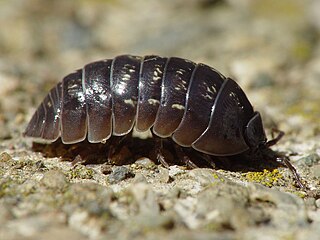 I like looking at the serious subjects in the news and seeking the lighter side of the issue. I love satire and spoofs. I see the ridiculous side of things all the time, and my goal is to share that light-hearted view.
View all posts by EagleAye →
This entry was posted in Short Fiction and tagged Alien Invasion, Flash Fiction, Funny, Humor, Roly Poly, Science Fiction, Short Fiction, Short Story, Sowbug. Bookmark the permalink.