Photo by: Footy and Foodie

Dr. Thorogood looked up into the sky with pride. As the sun slipped low in the sky, the pattern of clouds contrasted beautifully. “Isn’t it fantastic?” he said.

“I suppose so,” said Paul Lords, tech reporter at large. “How does it work?”

“The concept is simple really.” Thorogood pointed. “This patch of sky has been seeded with trillions of nanobots. On command, specific nanobots collect water vapor to form clouds. They form a ‘cloud dot.’ Enough of them form a letter. Eventually, they can spell out messages. It’s dot-matrix printing with clouds!”

“That is amazing…I guess.”

“They’re programmed with every written language know to Man. They can write in Sanskrit, even Sign Language. This will change skywriting worldwide!”

Thorogood scowled at Paul. “I sense a lack of enthusiasm.”

“Well, it is amazing technology.”

“Well perhaps not all written languages should be used, owing to practical considerations.”

Braille: For those who are visually impaired, Braille is a wonderful tool. Patterns of raised/recessed dots allow people to read as easily as a sighted person. A critical aspect of Braille is that the reader must physically touch the dots in order to read them.
https://en.wikipedia.org/wiki/Braille 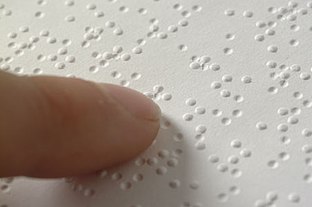 I like looking at the serious subjects in the news and seeking the lighter side of the issue. I love satire and spoofs. I see the ridiculous side of things all the time, and my goal is to share that light-hearted view.
View all posts by EagleAye →
This entry was posted in Short Fiction and tagged Braille, Flash Fiction, Funny, Humor, Nanotechnology, Science Fiction, Short Fiction, Short Story, Skywriting, Speculative Fiction. Bookmark the permalink.