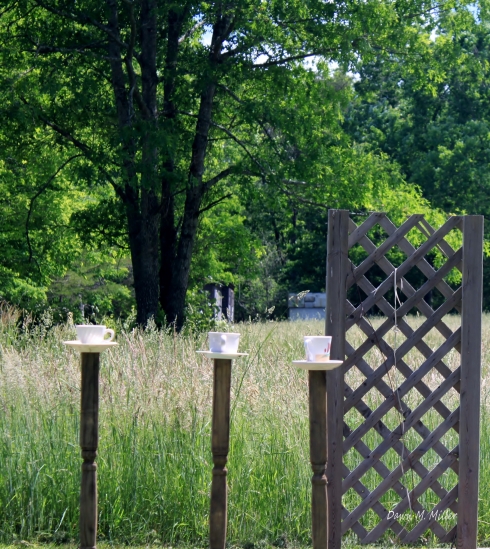 Gilbert found his three elderly aunts in the garden, drinking tea. “Aunties!” he called. “Is everything alright?”

“Why of course, Gilly,” said Gertie. She shoved a bowl into his hand. “Have some strawberries.”

Gilbert ate the fruit with relish. They always grew the tastiest strawberries. “Aunties, I got a call from the police. Have some taxmen come to visit recently?”

“There were those three hooligans,” noted Nattie. “They were trying to rob us!”

“Good lord! Did they hurt you?”

“Not at all,” assured Gertie.

“They thought dressing up in suits and trotting out forgeries would get them in the house,” chuckled Bitzy. All three pulled out .44 magnum pistols. “Our friends Smith & Wesson sent them off!”

Gilbert began sweating again. He devoured the strawberries in earnest. “Aunties, I think those really were taxmen.”

“And now the police say they are missing!”

“Not to worry, Gilly,” advised Gertie, patting his hand. “They’re not missing at all.”

“No?” Gilbert felt the weight of the world removed from his shoulders.

Arsenic and Old Lace: One of the funniest movies ever: “…Mortimer Brewster is a newspaperman and author known for his diatribes against marriage. We watch him being married at city hall in the opening scene. Now all that is required is a quick trip home to tell Mortimer’s two maiden aunts. While trying to break the news, he finds out his aunts’ hobby; killing lonely old men and burying them in the cellar. It gets worse.”
http://www.imdb.com/title/tt0036613/plotsummary

.44 Magnum Pistol – one of the most powerful handguns: “…When loaded to its maximum and with heavy, deeply penetrating bullets, the .44 Magnum cartridge is suitable for short-range hunting of all North American game—though at the cost of heavy recoil and muzzle flash when fired in handguns.”

I like looking at the serious subjects in the news and seeking the lighter side of the issue. I love satire and spoofs. I see the ridiculous side of things all the time, and my goal is to share that light-hearted view.
View all posts by EagleAye →
This entry was posted in Short Fiction and tagged Arsenic and Old Lace, Flash Fiction, Funny, Humor, Murder, Satire, Short Fiction, Short Story, Taxman. Bookmark the permalink.

24 Responses to Guns and Old Lace