Officer Terkel hated working the Parking Enforcement duty. It was obvious punishment. Terkel sighed as he walked along the wet sidewalk. Sleeping with the Police Chief’s wife was fun, but stupid.

Suffice to say, he didn’t take his job very seriously.

He was bored out of his mind.

Then he noted an alien spaceship had landed in a blocked-off area of the parking lot. He doubted they’d pay a parking ticket, so he booted the landing gear, and waited.

As he expected the aliens just sneered at him when they returned. But when they tried to take off, the boot jammed the landing gear and the ship refused to take off.

Terkel lit a cigarette and watched.

Of course, they had no money, so they gave him a device. Terkel accepted the bribe and let them go.

He took the glimmering thing to Francis, a NASA engineer.

“He said it’s a hyperdrive, whatever that is,” said Terkel. “Swore it’s worth bucks.”

Francis’ eyes glittered. He imagined Earth as an interstellar civilization, his name on every starship.

For the longest time I had never heard of a Parking Boot. So just in case others haven’t heard of them:
Parking Boot: “…A wheel clamp, also known as wheel boot, parking boot, or Denver boot,[1][2] is a device that is designed to prevent vehicles from being moved…”
https://en.wikipedia.org/wiki/Wheel_clamp 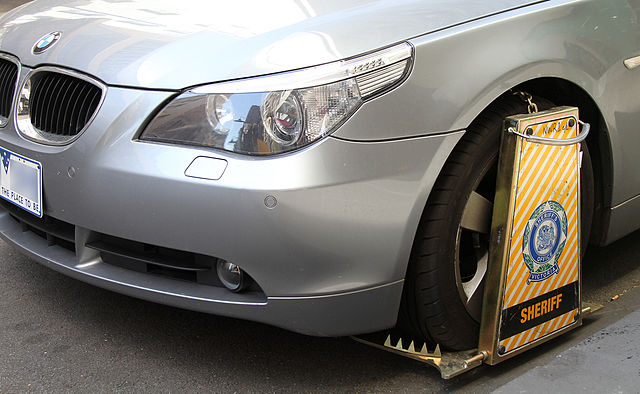 I like looking at the serious subjects in the news and seeking the lighter side of the issue. I love satire and spoofs. I see the ridiculous side of things all the time, and my goal is to share that light-hearted view.
View all posts by EagleAye →
This entry was posted in Short Fiction and tagged Aliens, Flash Fiction, Funny, Humor, Hyperdrive, Parking Boot, Parking Enforcement, Science Fiction, Short Fiction, Short Story, Spaceship. Bookmark the permalink.

16 Responses to The Parking Fine