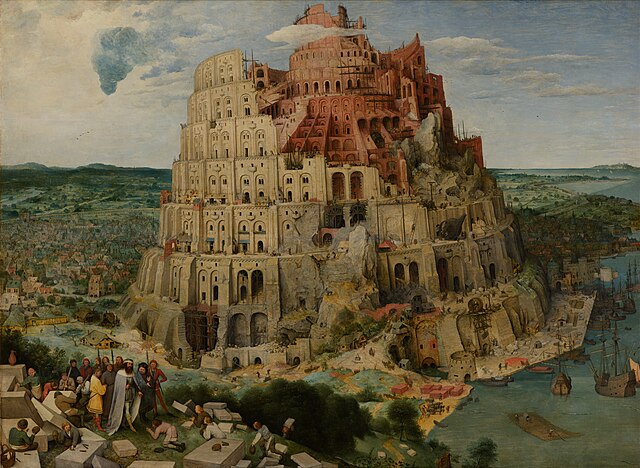 Tower of Babel: by Pieter Bruegel the Elder (1563)

Continuing on in the Momus News essays, let us consider the differences between technobabble and technical description.

I’ve been a technically-minded person for most of my adult life. I’ve made my living developing databases and refining web-based user interfaces. All this gets really very technical. While describing how it all works (and even in the stories I write), I’ve been accused of spouting technobabble many times. But was it really? Let’s have a close look at what technobabble really is.

According to my friend E.M. Swifthook (and I totally agree with her), true technobabble is a series of technical-sounding words applied to sound technical, but which really describe nothing. True technobabble sounds like this: “The aptulintian projectors were caked with hablinkat residue, and the intchatachol kazumitors were flexing into the metapuliting fields.” That previous is from my flash fiction story, “Christmas for Santa“. I used technobabble there for comedic effect, not really intending to convey useful information.

During this essay, I will spend far more time discussing Technical Description. The reason for that is, it is a far more complex animal, often misconstrued as technobabble. To begin, let’s get something straight: technical description does not strictly live in the realm of science fiction. Any topic, from rockets to magic to basket-weaving can have their technical aspects, using terms and concepts most people have never heard of. That doesn’t mean describing them is therefore technobabbling. If you’re writing a political thriller, you need to describe how the politics works and how it affects the characters. Fail to do this and the reader will be left in limbo. To me, you cannot write a book about politics without describing how politics works. You cannot write about magic without describing how magic works. You cannot write scifi without describing how the technology works.

There can be a big difference scifi and fantasy, but they can also be strikingly similar. In Devon Monk’s “Magic to the Bone” she describes a city with a magical grid (instead of the familiar electrical grid) and explains how it works and what its limitations are. That way, when everything goes to hell, you understand why. This wasn’t magi-babble, this was brilliant, thoughtful writing. When it comes to technical subjects, often the failings of a wondrous technology or magic are as important as the benefits.

I might put technical description into a scene if describing some wonder weapon, that is critical to the plot, to firmly nail down in the reader’s mind why it is dangerous. I might also leave clues in there for a means by which it can be overcome. I suppose I am writing for people like myself. I am never satisfied that something “just is,” I want to know why it is that way. When I get that explanation, I am a happy reader. I can read on, unfettered by unanswered questions about something merely placed to characterize this strange new world.

I think the best way is to write technical description is to link it back to real science (or plausible sources of magic) in some way. We don’t have AIs now, but we have computers that AIs are derived from. So an AI is an easily understandable next step forward. Writing fiction is essentially, telling lies. But the best way to tell lies is to mix them with known truths. So tell the lie of this futuristic technology or magic by mixing it with current scientific (or established magical tropes) facts or theories.

In my book, “The Huralon Incident,” I describe military rifles that fire hypersonic rounds. The rounds are small, but because they move so much faster than current rifle rounds, their destructive potential more than makes up for their size. They are electromagnetic guns (rail guns) which exist now, so I’ve described a plausible, believable weapon because it is based on existing technology.

I read/write science fiction and fantasy because I want something that’s different than what I know now. I want something that’s better (or worse) than what I understand now. For me to get the “feeling” of that difference, I (or the author) must describe what that difference is. It doesn’t have to be everything, just key elements to immerse me into that alternative world. Technical description should be used sparingly, offering a brief insight into how this unfamiliar world works, never interfering too much with the pace of the narrative. Just like with baking, a little salt in your cookies is great, too much is bad. Sprinkle just enough technical description into the story, and have succeeded in making an imaginary world, real, in the mind of your reader.

In The Huralon Incident, there is no technobabble, but there’s a lot of technical description. I’ll leave it up to you if I balanced it with a fast-moving and engaging narrative. You can find it here:

What about you? How would you define Technobabble, and where did you find it?

I like looking at the serious subjects in the news and seeking the lighter side of the issue. I love satire and spoofs. I see the ridiculous side of things all the time, and my goal is to share that light-hearted view.
View all posts by EagleAye →
This entry was posted in Essay and tagged Essay, Fantasy, Science Fiction, Speculative Fiction, Technical Description, Technobabble, Urban Fantasy, Writing, Writing Advice. Bookmark the permalink.

5 Responses to Technobabble Versus Technical Description