Vincenzo was proud of the metal eagle he’d bought. He couldn’t believe the low price he got for it at the market.

Giaco had concerns. “Why would such a beautiful sculpture be so cheap?” A powerful man, he tried to lift it but it wouldn’t budge. “What is it made of?”

They collected six strong men, but even they could barely move it. All agreed it was heavier than solid gold. They hastily assembled a crane from whole oak trees. It took days but they finally mounted the eagle on the City Building.

Unfortunately, their troubles weren’t over. Within a month stones began falling away from the building.

A week later, with the City Building’s facade threatening to collapse, they removed it. They towed it back to market on a cart used for giant marble columns. Giaco said, “Where on earth did this thing come from?” 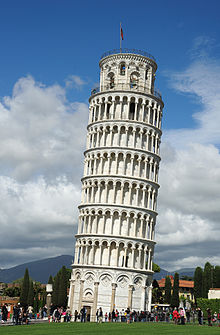 I like looking at the serious subjects in the news and seeking the lighter side of the issue. I love satire and spoofs. I see the ridiculous side of things all the time, and my goal is to share that light-hearted view.
View all posts by EagleAye →
This entry was posted in Short Fiction and tagged Eagle, Flash Fiction, Funny, Humor, Italy, Leaning Tower of Pisa, Sculpture, Short Fiction, Short Story, Speculative Fiction. Bookmark the permalink.

28 Responses to Too Heavy